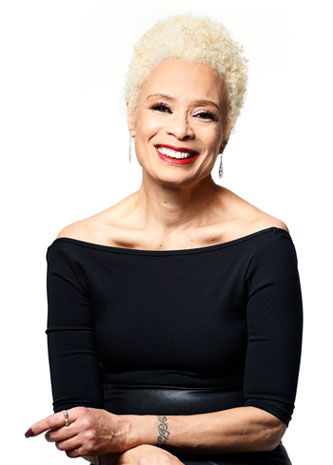 Valarie Pettiford is an award-winning actor, dancer and singer. She earned a Tony nomination for Fosse. She will soon be seen in the Bad Wolf production A Discovery of Witches for the UK's Skyone. She plays Emily Mather, a series regular in the television adaptation of the New York Times' best-selling All Souls Trilogy of novels.

Valarie's television highlights include the series regular role of Ronda Sales on Season 4 of Being Mary Jane, four seasons and 3 NAACP Image Awards' nominations for the series regular role of Big Dee Dee on the hit television comedy Half and Half. She has appeared in recurring roles as Simone Porter on Valor, Charlene Cooper on The Blacklist, and Beverly on Born Again Virgin. She has guest starred on top-rated series such as Blackish, Bones, House of Payne, True Blood, Treme, and Criminal Minds.

On film, her roles include Chippy Duncan in The Family Business, based on the critically acclaimed book by Carl Weber, and Judge Alice Miller in the forthcoming Senior Moment, starring Christopher Lloyd, William Shatner, and Jean Smart. She played the pivotal role of Aunt Geneva in Jumping the Broom and has appeared in movies such as Stomp the Yard, Why Did I Get Married 2, Glitter, and The Wiz among others.

In addition to her Tony nomination, Valarie was also nominated for the Outer Critics, Drama League, and Mora Dora awards for Fosse. She appeared in the first national tour of Fosse's Dancin' and his last original musical, Big Deal, on which she was part of a skeleton crew, acting as audition instructor and Dance Captain, as well as a featured performer. She received glowing reviews as Judith Jamison's understudy in the original cast of Sophisticated Ladies on which she was also the swing Dance Captain. She was nominated for an Ovation award for her portrayal of Julie in the touring company of Showboat.

Valarie also holds the honor of being the first American actor to portray Velma Kelly in the West End revival of Chicago, starring alongside the legendary Chita Rivera. When Ms. Rivera was inducted into The Kennedy Center Honors, she requested Valarie reprise the role of Velma for her performance.

Valarie portrayed the role of Anita in the 30th Anniversary tour of West Side Story. She won an NAACP Best Actress award for the role of Queenie in the Los Angeles premiere of Michael John La Chuisa's The Wild Party. She also received the Bistro Award for Cabaret Debut at the Metropolitan Room. She has performed sold out concerts of her one-woman show across the United States. She has released two albums, Hear My Voice and Velvet Sky; both available on CD Baby.

Valarie is extremely proud and deeply honored to be hired by the Verdon/Fosse Legacy to reconstruct Bob Fosse's brilliant choreography and teach it to a new generation of dancers in exclusive master classes.