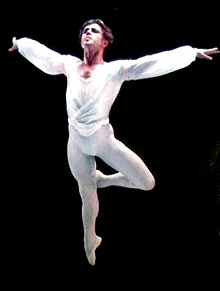 Alexander Filipov was born in Moscow, Russia. He started his classical ballet education at The Bolshoi Ballet Academy and at the age of ten he had been studying at the famous Vaganova Ballet Academy for nine years under the great teachers Alexander Pushkin and Asaf Messerer. After graduation he joined the Classical Ballet of Russia. With this company he extensively traveled throughout Russia and Western World. In 1970, while in Mexico A. Filipov decided to remain in the West. Immediately after that he was invited to join the ABT and debuted in Swan Lake with Eleanor D`Antuono. He danced leads in Swan Lake, Giselle, Le Corsair, La Fille Mal Gardee, Don Quixote, Coppelia, Paquita and Theme and Variations by G. Balanchine. Appearing as guest artist with major companies throughout U.S.A and South America, in 1978 he joined San Francisco Ballet as a principal dancer and became a "permanent guest star" with the Pittsburgh Ballet Theater where he danced classical repertory as well as the man lead in the revival of Ruth Page`s Frankie and Johnnie. Mr. Filipov made his Broadway debut in On Your Toes partnering Natalia Makarova. His teaching experience includes teaching at the ABT, Alvin Ailey Ballet, Joffrey Ballet and Steps Dance Studio in New York. Now he continues his career as a teacher sharing his extensive knowledge with the new generation of dancers.