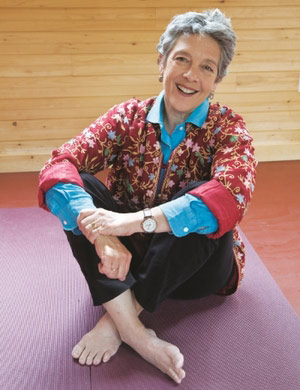 Alison's instinct for collaboration and education led to a position as Choreographer-In-Residence and Assistant Professor of Dance at Dartmouth College, after she graduated from UCLA with an M.A. in Dance. Her initial class was offered to the all-male undergraduates student body, many of whom were athletes with no dance background. Alison's ability to teach improvisation and collective creativity proved transformational, and from this unexpected setting emerged the origins of Pilobolus Dance Theater, where she was a Founding Artistic Director.

At Pilobolus, Alison pioneered the development of unorthodox partnering techniques, vaulted into unexplored aerial terrain, and built an eclectic repertoire of choreography ranging from performing as the opening act for the Frank Zappa Show, collaborating with the Rockettes at Radio City Music Hall, to working with a Diné medicine woman. She has choreographed for La Scala Opera, the Geneva Opera, the Ballet du Rhin, and the Fete de l'Humanité.

In 1980, Alison launched the company Momix with Moses Pendleton. She taught in the Theater Studies Program at Yale for six years while simultaneously working as Artistic Director and choreographer for Pilobolus Dance Theatre, where she headed the company's educational outreach for fourteen years.

Alison has been the recipient of numerous awards, including the Guggenheim Fellowship in 1980, the 1992 Laurel Award for Life Time Achievement; the 2007 Connecticut Governor's Award, the Scripps Award in 2000, and the CINE Golden Eagle Award in 2002. She was named Performing Arts Fellow for 2009 by the Maine Arts Commission.

Alison and her family live in a close-knit community on the coast of Maine, where she and her dancers frequently gather for inspiration and creative development.