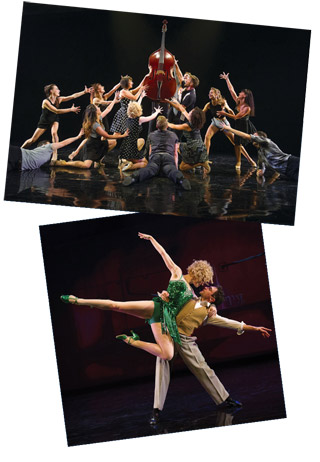 American Dance Machine for the 21st Century (ADM21), founded in 2012 by Nikki Feirt Atkins, is dedicated to creating a living and vibrant archive of classic and current notable musical theater choreography. ADM21 is continuing the legacy of the late Lee Theodore, who established The American Dance Machine in 1976. Theodore created a "Living Archive" of musical theater dance to address her belief that "many great choreographic works are lost with the musical they once embellished." Of concern was that the artistry of each dance would vanish with the artists who created them. That was the impetus that drove The American Dance Machine from its pilot program in 1976 to its final days following the death of Lee Theodore in the late 1980's.

Since its inception, ADM21 has been fortunate to have had the opportunity to perform the work of some of the greatest choreographers including but not limited to Bob Fosse, Jerome Robbins, Jack Cole, Michael Bennett, Gower Champion, Agnes de Mille, Tommy Tune, Susan Stroman, Warren Carlyle, Wayne Cilento, Randy Skinner, Jerry Mitchell, Rob Ashford, Andy Blankenbuehler; and coached by the likes of Chita Rivera, Donna McKechnie, Robert La Fosse and more.

The vision of ADM21 is to establish American Dance Machine for the 21St Century as New York City's leading center for musical theater dance and to perpetuate the excellence of this genre through the education, preservation and presentation of classic and current notable musical theater dances by outstanding choreographers.