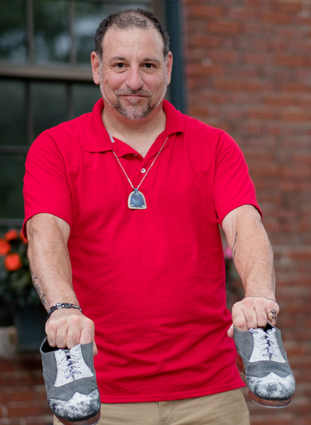 This native New Yorker, has performed, taught and toured internationally as a tap dancer since 1994. He has opened shows for people such as Shirley Bassey, Natalie Cole, Earth, Wind & Fire and Stevie Wonder. Anthony has made appearances on, Regis & Kathie Lee, Good Day New York, and MTV Live to name a few. He has been performing and teaching in all 50 states, as well as, Mexico, Canada, the Netherlands, South Africa and Monte Carlo.

An original NYC cast member, Anthony is the first American to earn a standing role in Tap Dogs. He thoroughly enjoys being a well-known, veteran member of what is currently the longest running tap show ever. In early 2013, Anthony performed in his final tour with the international cast of Tap Dogs and returned to NY.

Teaching, performing & choreographing is truly Anthony's life passion and the combination of these things led him to the unexpected birth of his own tap company, #Taplife and #TaplifeToo, the pre professional "sister company" to #Taplife. As Artistic Director for #Taplife and #TaplifeToo, he developed the show Sounds of a #Taplife, curated In Good Company and produced original music videos featuring #Taplife Company. Anthony's current projects are not only dance related as he has a keen interest in technological developments that can enhance the dance studio industry.