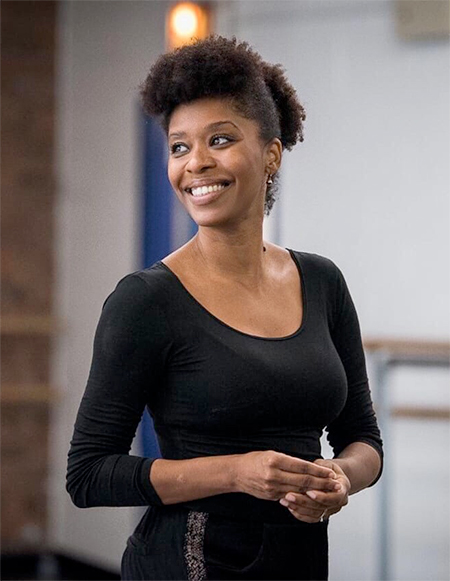 Bethania Nascimento F. Gomes, born in Rio de Janeiro, Brazil, pursued a dance career in classical ballet, training at Maria Olenewa Municipal School in in Rio de Janeiro ( Brazil) . She joined the Dance Theater of Harlem School in 1991 as a scholarship student, joining the company in 1992 rising to the rank of principal dancer with The Dance Theatre of Harlem in 2001 becoming the first Afro Brazilian ballerina to reach such a rank . She was mentored and directed by Arthur Mitchel. She has also being part of Dance Company Complexions (1998) , Has worked with the late recording artist Prince ( 1997 ) as a ballet dancer In his project New Power Generation Dance Company.

Between the years of 2006 and 2014 Bethania had worked in Brazil at many outreaches dance programs creating her own ballet program in one of the favelas ( Chapeu Mangueira / Babilonia ) in Rio de Janeiro. One of her formers students is Ingrid Silva one of DTH principal dancers and top dance influencer. She has also choreographed for BHM 2020 Nike campaign narrated by Serena Williams, Latino heritage month for Facebook 2020 as Ingrid Silva's coach and recently ( January 1rst 2023 ) choreographed for the inauguration of the elected President of Brazil Luis Inacio "Lula" Da Silva Bethania also is dedicated to curate her mother the late civil rights activist and icon Beatriz Nascimento https://en.wikipedia.org/wiki/Beatriz_Nascimento . works, legacy and activist becoming and activist herself for civil rights. Her first work has been the book Todas as Distancias (2015) a collection of poems and aphorisms by Beatriz Nascimento, in collaboration with Dr. Alex Ratts. (Goiânia University, Brazil) She has been collaborating with Dr. Christen A. Smith (University of Texas, Austin) and Dr. Archie Davis (Kings College, London) for the first series of Beatriz works into English: "In Front of the World: Nascimento" (Antipode, 20210. Also in 2021 she published her first children's book Betha a Bailarina Pretinha ( Editora Jandaira , Brasil ) based on her life story as a black ballerina , and in 2023 is publishing the first book of translated works of Beatriz Nascimento "The Dialectic is on the Sea" ( Princeton Press ).

In 2022 Bethania founded the Beatriz Nascimento Foundation, a nonprofit organization based on Arts and Education to empower Afro Brazilian Culture and History for the African Diaspora and citizens of the world. https://www.beatriznascimentofoundation.org

Currently is a teacher, coach and choreographer at Dance Theatre of Harlem, Harlem School of the Arts and is part Emerge 125 Dance Company as a ballet mistress directed by Tiffany Ray Fisher.