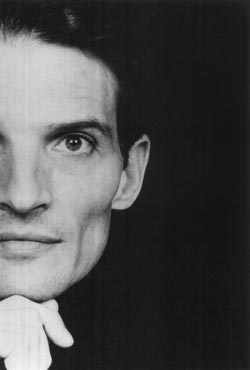 Bill Hastings has performed in over fifty musicals and plays including Broadway and National touring productions of The Most Happy Fella, A Chorus Line, Cabaret, Rags, Bob Fosse's Dancin', and Sweet Charity. Bill has choreographed numerous productions for U.S., European, and Japanese theater, television, video, industrial, and concert dance companies.

In Texas, Bill served for six years as Resident Choreographer for Houston's Theatre Under the Stars and Humphrey's School of Musical Theatre. While there, he choreographed over twenty productions including; Peter Pan, The King and I, The Pajama Game, My Fair Lady, South Pacific, Where's Charlie? , The Wiz, Grease and Pinocchio. He served as dance captain for Houston Grand Opera's The Merry Widow starring Beverly Sills and danced in Houston Ballet's Prodigal Son starring Edward Villella.

In California, Bill was Artistic Co-Founder of The Dance Connection, a studio dedicated to pedagogic and theatrical excellence. There, he created "Orange Crush" and "Local Motion" two award winning performance groups for youngsters and teens. He also was president of South Coast Ballet, a member of the Costa Mesa Arts Council, dance critic for The Arts In Orange County Magazine, and co-producer of the Bal Mystique Gala Benefit for South Coast Repertory Theatre.

As a five-time guest artist at the Jacob's Pillow Dance Festival, Bill has not only taught for the Jazz and Musical Theatre Workshop, but also lectured on the life and work of Jack Cole and twice choreographed for the Jacob Pillow's A Jazz Happening. His piece, Nabta Playa, created for the modern dance company, RhythMEK, and with an original score by well-known composer, Marty Beller, premiered at the Ted Shawn Theatre for the 2000 Gala Opening of Jacob's Pillow, and subsequently, was performed in concert at the Doris Duke theatre and was featured on the PBS/Metro 13 modern dance series hosted by David Parsons.

For the Cuyahoga Youth Ballet, Bill's full-length ballet, Mole Music, based upon the children's book by David McPhail with an original score by William Wade received critical acclaim. Also garnering high praise was "...it will whisper your name," an anti-war piece commissioned by the High School of Performing Arts in Orange County, CA. Critics also rejoiced in the joyous Tony's Gone Fishing, which was created for the Colorado Jazz Dance Company. For Dance Kaleidoscope in Southern California he created the charming, The 4-Minute Egg, and for the Laguna Beach Arts in Motion, Pink Tofu. For New York's Rockland Youth Dance Ensemble, Bill has choreographed I'll be Bach...Shortly, It's Greek to Me, The Letter, Dans L'Fond d'leau (a tribute to the survivors of Hurricane Katrina), Hernando's Hideaway, Arabian for the Nutcracker, as well as Children of the Wind for The Lauri Strauss Leukemia Foundation tribute to Charles Strauss at Carnegie Hall with the NY Pops. Bill conceived, produced, directed and choreographed the original work entitled Lotti: the Girl with the Golden Knot...a highly lauded full-length dance opera performed at Riverspace Theatre in NY.

Bill has been on the faculty of four universities. In 2004 he received the coveted NEA Dance USA Grant to restage works of Bob Fosse at the University of Nebraska. He recently was a recipient of The Willson Center for the Arts and Humanities Visiting Artist Residency, the most prestigious grant of its kind awarded by the University of Georgia; and, has twice received grants to the University of Richmond to stage original works. Most recently Bill served as a guest choreographer at Manhattanville College. In 2009, he was awarded an Arts in Education grant from the Arkansas Arts Council for his annual workshops with the Thea Foundation.

Mr. Hastings has taught for festivals, workshops, and schools worldwide including; The Boston Summer Dance Festival, The American Theatre Dance Workshop at Hofstra University, the American Ballet Festival at Vassar and the Ohio Dance Theatre in Oberlin. At the Royal Danish Ballet in Copenhagen, he was the first teacher of American theatre dance for the famed Bartholin Dance Institute. Bill is a returning Professor at Baardar Academy in Oslo; and, annually a jurist in Portici, Italy for the Accademia dello Spettacolo's year-end exams. He proudly served as President of the Jury for the National Dance Competition in Brazil. Bill has also taught for the Legacy Weekend at Hunter College, the Dance Master Weekend at Wesleyan University, the David Howard Workshop for Teachers, and at The House in Brussles, The School of National Dance in Madrid, The Renato Greco School in Rome, and for IAC in Tokyo.

Bill is privileged to have worked with such dance luminaries as Bob Fosse, Graciela Daniele, Michael Bennett, Ron Field, Tony Stevens, Phil Black, Luigi and the great teacher Harvey Hysell. He proudly assisted Chet Walker and Gwen Verdon with the creation of Fosse, the 1999 Tony Award Winner for Best Musical; and, assisted Scott Salmon with The Christmas Spectacular at Radio City as well as The Miss America Pageant at Atlantic City.

For further information and letters of recommendation please go to Bill's website: www.billhastings.org