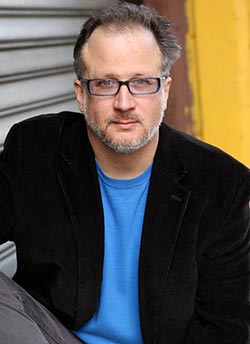 Bob Richard is the choreographer of Broadway's top selling Christmas show How the Grinch Stole Christmas!: The Musical. Off Broadway, Bob was honored to work with the York Theatre Company in The Road to Qatar!, the true new musical comedy honoring the road films of Bob Hope and Bing Crosby. His work has also been seen on The Today Show, The Tonight Show with Jay Leno, and center stage for Macy's Thanksgiving Day Parade. Bob's choreography has also been seen in Film estivals across the country, premiering in the prestigious New York Big Apple Film Festival,the Los Angeles Film Expo and the Fort Lauderdale International Film Festival in Florida.

Bob is the Resident Choreographer for Sacramento Music Circus and has staged over twentynine productions there over the past 13 years. His extensive regional work has taken him to the 5th Ave Theatre, Theatre under the Stars in Houston, North Shore Music Theatre, and American Musical Theatre of San Jose, to name a few, where he has pleased audiences with classics such as The King and I, The Music Man, Fiddler on the Roof, The Sound of Music and Annie, as well as the world premiere production of Dean Pitchford and Tom Snow's Footloose and the Tenth Anniversary Production of Frank Wildhorn's Jekyll and Hyde. Bob also choreographed the first productions of both Hairspray and Les Miserables to ever be staged in the round. His work can be seen every year at the Old Globe Theatre, with the long-running family production of How the Grinch Stole Christmas!: The Musical, where Whoville will live forever in the hearts of the children of San Diego.

Bob has wowed audiences with his jazz, tap, and musical theatre choreography, and also notably with his original, full length, character driven ballets. He has been honored to win awards for his choreography from San Jose, California and Seattle, Washington to St Paul, Minnesota and Houston, Texas. His career has encompassed 30 years of dancing, teaching and choreographing in major cities all over the world, including Tokyo, Sapporo, Osaka, Nagoya and Hiroshima in Japan; Moscow, Leningrad and Minsk in the Former Soviet Union; Vienna, Austria; Copenhagen, Denmark; and Tours that have blanketed the United States and Canada.