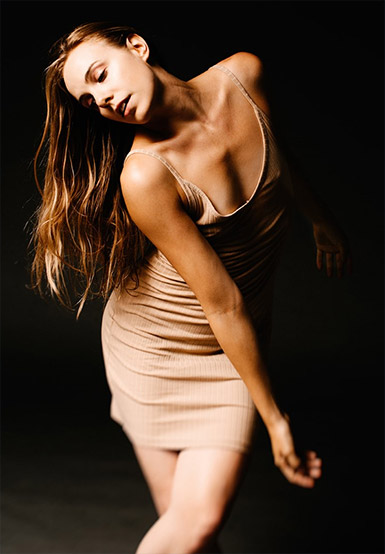 Chelsea Thedinga trained in Las Vegas, Nevada at The Las Vegas Academy of Performing Arts and Inspire Dance Company under the artistic direction of Robert Contreras. Some of her credits include the MTV Video Music Awards, the feature films La La Land, VOX LUX, In the heights, GLEE, The Academy Awards, Ellen, Dancing With the Stars, The Emmy's, Al Blackstone's Freddie Falls in Love, The American Music Awards, and America's Got Talent. She has completed 6 national tours with Travis Wall's Shaping Sound and performed with Stacey Tookey's company Still Motion in New York, LA, Montreal, and Jacob's Pillow.

Chelsea, was also a principal dancer for Sonya Tayeh's original work You'll Still Call Me by Name that has presented at both New York Live Arts and now at Jacobs Pillow. Now residing in New York, Chelsea continues to teach, choreograph, and perform in the city and across the country. Most recently, she joined Peter Chu's company Chuthis, and is in creation for a new work that will premiere in the spring of 2022.