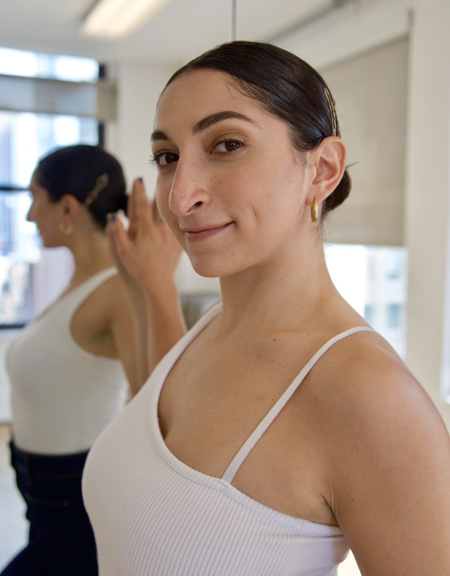 She has appeared in works by Brenda Bufalino, Jason Janas, Derick Grant, Felipe Galganni, Leonardo Sandoval, and Tony Waag, to name a few. Additionally, this proud Jacob's Pillow Tap Program alumna has danced with a number of notable companies including Michelle Dorrance's Dorrance Dance, Sarah Reich's Tap Music Project, and Chloe Arnold's Apartment 33. Over the past few years Christina has performed throughout the NYC area both in acclaimed venues, such as the Duke on 42nd, Jazz at Lincoln Center, New Victory Theater, and Brooklyn Academy of Music (BAM), and on reputable award show stages, including the New York City Capezio A.C.E Awards and the 2016 Bessie Awards.

Most recently, she has worked internationally as an ensemble member of Christopher Erk's Tap Factor performing four original tap dance shows on board the #1 rated cruise ship in the world, the MS Europa 2 of Hapag-Lloyd Cruises. As an emerging, young choreographer, Christina co-produced On That Note, a full-length evening of tap dance and live jazz performance in New York City at Feinstein's/54 Below (2018), Teatro Sea (2017), and Don't Tell Mama cabaret club (2016). Passionate about sharing her love and knowledge of the art form, she currently teaches at the American Tap Dance Foundation, where she is in her second season as an Artist in Residence. Christina is focused on developing her own works and creating her own artistic voice in the dance community.