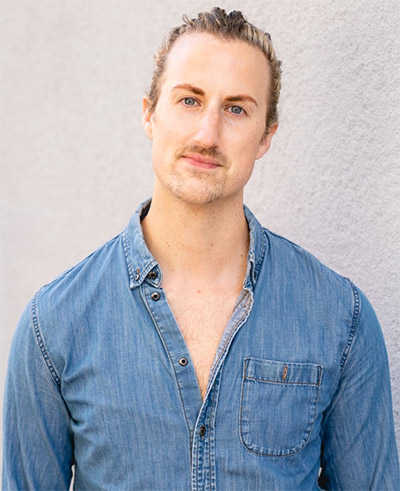 Clinton is a New York based choreographer, actor, and producer with a diverse resume of experience and specialty in creating unique performances.

From making up dances in his backyard at 8, to performing all across North America by the time he was 23- Clinton has never stopped making moves since he was little. Beginning his performance career in the concert dance world- Clinton worked with choreographers Zvi Gotheiner, Shannon Gillen, Charlotte Griffin, Benoit-Swan Pouffer, Take Ueyama, Kate Watson-Wallace and performed internationally for Tania Perez-Salas (Mexico) and Korhan Basaran (Turkey). He had the privilege of being a swing for Josh Prince's Dance Lab NY and created new work with choreographers Camille A. Brown, Geoffrey Goldberg, Marcelo Gomes, and Karen Sieber.

Clinton was an original cast member of the Drama Desk Award winning Queen of the Night, as well as a dance captain and understudy for a Principal role. His knack for immersive theatre was honed and developed during his time with the show and led to the creation of his own immersive show The Hunt in Brooklyn, under the direction of Kristin Yancy. He was a core member of LubDub. Theatre Co. and most recently helped devise the very successful run of The Doubtful Guest at Public Arts in NYC.

As a Co-Founder and Resident Artist of immersive events company MinuteZero, Clinton has had the privilege of directing, choreographing, or performing in events created for and with high profile clients such as Microsoft (Age of Empires IV Times Square release), Rag + Bone (NYFW '19), The Brooklyn Museum (Artist Ball), The National Wildlife Foundation (Annual Gala), Under Armour (Rush Lab product launch), Hulu (HULUween '19), and Microsoft (Age of Empires IV Times Square release). He is the choreographer and director for PRIMME, an up-and-coming queer pop artist based in NYC, choreographing multiple music videos as well as directing his live performances and concerts. Clinton was an associate choreographer to Mary John Frank's most recent musical short, The Global Her Project as well as choreographer for a commercial debuting a new product from Bausch + Lomb.

Clinton has also set work on college and high school students across the US and is a guest instructor at Friends Academy in Long Island. He frequently guest teaches across the NYC metro.