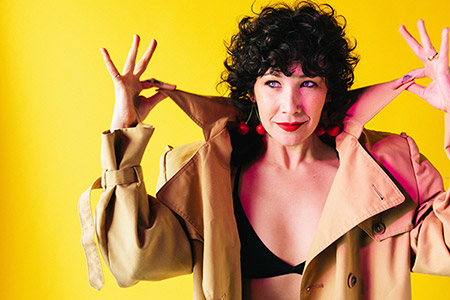 Dana Wilson is a bright and vivacious content creator, choreographer, and performer. Although she is best known for her work along side Justin Timberlake, Dana's feature in Dance Magazine declares her "Anything But A Backup Dancer". She has been a part of JT's creative team since 2007, and recently contributed movement for Kesha and Maclemore, Vance Joy, Miley Cyrus, Joe Jonas, 2 Chains, Kendrick Lamar and Robin Thicke, and was a guest choreographer on SYTYCD season 7.

While working in TV, Film, and along side pop industry megastars, Dana also makes up one third of the wildly original and imaginative group The Seaweed Sisters adored and admired by a wide range of audiences from toddlers and their parents perusing YouTube, to the screens of the Cascadia International Women's Film Festival).

In the digital world, Dana got GoPro's attention for her 365 consecutive daily videos on Instagram (@danadaners), and shortly after, established a relationship with 360 camera Ricoh Theta as a content creator and influencer. Her appetite for capturing and sharing is on par with her love of dance, so Dana is constantly experimenting with new technologies and techniques (like 360 degree video capture and editing, VR, and Drones).

Dana has been an instructor for over 13 years and recently started her own training/ performing company, "The Bureau of Nonverbal Communication" (aka The BoNC) to investigate, exercise, and share dance on a conceptual level. In a boldly nostalgic style, The BoNC says what nobody else is saying...with their tongue firmly placed in cheek.

With a refined yet bizarre style, thoughtful and fresh voice, and healthy dose of humor, Dana illuminates everything she crosses from the worlds biggest stages to smallest cell phone screens.