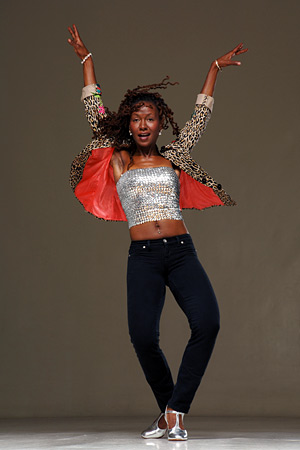 Dormeshia (performer, choreographer, instructor) was on the cover of Dance Magazine and tap coach to the king of pop Michael Jackson himself over the course of 11 years. She is currently on the board as the Tap Advisor for Dance Magazine and was the official Tap Spokesperson for Capezio being featured in their international advertising campaign. She was featured on Broadway in Black and Blue, the Tony Award Winning Bring In Da'Noise, Bring In Da'Funk, International Tour of Bring in Da'Noise, Bring in Da'Funk (dance captain/principal dancer/understudy to the lead role). Other performances include the national tour of Wild Woman Blues and Debbie Allen's SAMMY (the life and times of Sammy Davis Jr.). Dormeshia was nominated for best actress for her starring role in "The Rise and Fall of Miss Thang" (Lavender House Films) currently touring film festivals nationwide. Other film credits include "TAP" with Gregory Hines, Spike Lee's "Bamboozled" (Assistant Choreographer/actress), and "The Rodgers and Hart Story: Thou Swell, Thou Witty". Dormeshia's choreography has been featured in TAAP:The Art & Appreciation of Percussion and was utilized in Michael Jackson's music video "Rock Your World". She was also spotlighted in a commercial for Tops.