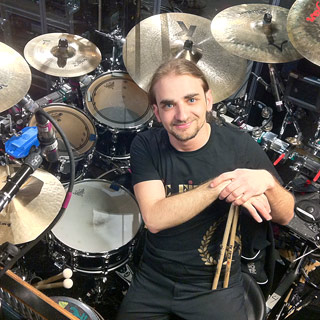 As a scholarship recipient, Giancarlo decided to further his studies at Berklee College of Music in Boston. He studied under Terri Lyne Carrington, Kenwood Dennard, Mark Walker, Tony "Thunder" Smith; and collaborate with Gabrielle Goodman, Lawrence Watson, Janice Pendarvis, and Prince Charles Alexander, among many others. While at Berklee, he soon became one of the most in demand drummers in the Boston area and received prestigious awards:

While in Boston, Giancarlo was a musician for Musical Theatre productions including West Side Story, Parade, Aida, The Great American Trailer Park Musical, Nine and Drowsy Chaperone.

He graduated Summa Cum Laude from Berklee College of Music in Drum Set Performance in August 2010 and moved directly to New York City. In NYC, he was selected to be the drummer on the 2nd National Tour of the award-winning Broadway musical In The Heights, (Grammy Award for Best Musical Show Album and Winner of 4 Tony Awards, including Best Musical). From 2012 to 2013 he was drum chair for the 1st National Tour of the award-winning Broadway musical, The Book of Mormon, (Grammy Award for Best Musical Theater Album and Winner of 9 Tony Awards, including Best Musical). Giancarlo was the drummer for the New York premiere of Mr. Chickee's Funny Money, music written by Motown legend, Golden Globe winner, and three-time Grammy Award winner Lamont Dozier, in 2014. The musical was nominated for Best Family show by the Off-Broadway Alliance. Since Fall 2014, Giancarlo has been very active in the Broadway scene, subbing at The Book of Mormon, The Lion King, Hamilton and The Last Ship (performing with STING). He is currently the drummer on the world premiere of Dear Evan Hansen, a new musical written by TONY nominees Pasek and Paul, starring Ben Platt from Pitch Perfect and The Book of Mormon.

He has been featured in several magazines and websites, including The Huffington Post, Broadway World and Berklee.edu. He is a proud endorser of Pearl drums, Zildjian cymbals, Remo heads, and Vic Firth sticks.

Giancarlo has been playing for dance classes, rehearsals, and performances since 2011 and has enjoyed being a musician at Steps Youth Programs since 2014.