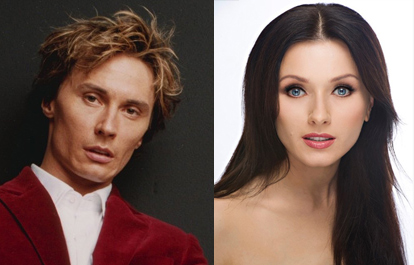 Irina Dvorovenko
A former principal dancer of American Ballet Theatre, Irina Dvorovenko was born in Kiev, Ukraine, and began her ballet training at the Kiev Ballet School at the age of ten. She joined the National Opera Ballet of Kiev in 1990 as a soloist, rising to the rank of principal dancer in 1992. Joining American Ballet Theatre in 1996, Ms. Dvorovenko was made a soloist in 1997 and was appointed principal dancer in 2000, following a stunning season which won her widespread critical and popular acclaim. A dancer of infinite range, her repertoire with the National Opera Ballet included included leading roles in many of the great classics: Gamzatti in La Bayadeére; Kitri, the Queen of the Driads and Mercedes in Don Quixote; Giselle and Myrta in Giselle; Princess Aurora and Princess Florine in The Sleeping Beauty; Odette-Odile in Swan Lake; the Sugar Plum Fairy in The Nutcracker; and the title roles in Cinderella and Paquita. She also performed pas de deux from Le Corsaire, Diana and Acteon and La Sylphide, as well as the Tchaikovsky Pas de Deux.

Her diverse repertoire with ABT includes her commanding portrayal of both Nikya and Gamzatti in La Bayadeére; Cinderella in Ben Stevenson's production; Kitri, the Queen of the Driads and Mercedes in Don Quixote; the Lilac Fairy and Princess Florine in The Sleeping Beauty; Odette-Odile in Swan Lake; Giselle and Myrta in Giselle; Juliet in Romeo and Juliet; Marguerite in "Cady of the Camellias", Tatiana in Onegin; the title roles in Raymonda; Swanilde in Coppeèlia; the Sugar Plum Fairy in The Nutcracker; Medora in Le Corsaire; the Ballerina in Etudes; the Empress in Anastasia; Hanna and Valencienne in The Merry Widow; Cupava in The Snow Maiden; the Operetta Star in Offenbach in the Underworld; the Siren in Prodigal Son; and Les Sylphides, Apollo, Tchaikovsky Pas de Deux, Sylvia Pas de Deux and Paquita. Ms. Dvorovenko also excels in contemporary choreography and has danced leading roles in Twyla Tharp's Push Comes to Shove, the Brahams-Haydn Variations and In The Upper Room; Symphony in C (first and second movements); Kylian's Petit Mort; Christian Spuck's Le Grand Pas de Deux; Nacho Duato's Without Words; Natalie Weir's Hereafter; Brüch Violin Concerto, Transcendental Etudes, The Wall, Maguar Suite, Jazzmania, Don't Bring Lu-Lu, and Pas des Déesses.

In the spring of 2013, Ms. Dvorovenko retired from the ABT stage and simultaneously made her stunning musical theatre debut as Vera Baronova in the New York City Center Encores! production of Rodgers & Hart's "On Your Toes," garnering outstanding reviews.

Maxim Beloserkovsky
A former principal dancer of American Ballet Theatre, Maxim Beloserkovsky received his dance training at the Kiev Ballet Institute. In 1990 he danced as a leading soloist with the National Opera of Bulgaria where he remained for one year. From 1991 to 1994, he was a principal dancer with the National Opera Ballet of the Ukraine, and toured with them to numerous countries, including France, Germany, Spain, Hungary, Egypt, Japan, Mexico, Canada and the U.S. He performed most of the major roles in the classical repertory: the Prince and Bluebird in The Sleeping Beauty; Prince Siegfried and the Pas de Trois in Swan Lake; Albrecht in Giselle; Ferhad in Legend of Love; and the Pas de Deux from Le Corsaire, Don Quixote and La Sylphide.

Equally confident in both classical and contemporary works, Mr. Beloserkovsky brings graceful dignity and elegance to his many roles. His repertoire with ABT includes Basilio and Espada in Don Quixote; Prince Desirè and Bluebird in The Sleeping Beauty; Siegfried in Swan Lake; Romeo in Romeo and Juliet; Albrecht in Giselle; Jean de Brienne in Raymonda, Oberon in The Dream; the lead in Theme and Variations; Conrad and Lankendem in Le Corsaire; Camille in The Merry Widow; Colas in La Fille mal Gardée; Lensky in Onegin; Misgir in The Snow Maiden; James in La Sylphide; Franz in Coppelia; the Cavalier in The Nutcracker; Aminta in Sylvia; and the Prince in Cinderella. He has also danced leading roles in The Leaves are Fading, Lilac Garden, Dim Lustre, Bruüch Violin Concerto, Mozartiana, Symphony in C, Symphonic Variations, Les Sylphides, Etudes, Apollo, Pas des Déesses, La Bayadère (Act II), and Variations for Four, as well as Sylvia Pas de Deux, Tchaikovsky Pas de Deux and Paquita. His athleticism and style have also earned him leading roles in important contemporary works: Twyla Tharp's Push Comes to Shove, The Elements and The Brahams-Haydn Variations; Nacho Duato's Without Words and Remanso; Natalie Weir's Hereafter; Mark Morris's Drink to Me Only With Thine Eyes; Jiri Kylian's Sinfonietta; John Neumeier's Spring and Fall; Christian Spuck's Le Grand Pas de Deux; Stanton Welch's Clear; Peter Quanz's Kaleidoscope; Martha Graham's Diversion of Angels; and Jerome Robbins's Afternoon of a Faun.

In the spring of 2012, Maxim retired from the ABT stage and became a faculty member of Ballet Academy East where he employed his extensive knowledge and experience to teach ballet to the next generation. In 2015 he also became a guest teacher for ABT's Studio Company.

Since 2013, Maxim and Irina have been directing their own International Ballet Summer Intensive programs in New York City and Panama City. They also launched a successful line of ballet wear, "Irina&Max" by Bloch, in 2005. Together they are the proud parents of Emma Galina, born in March 2005.