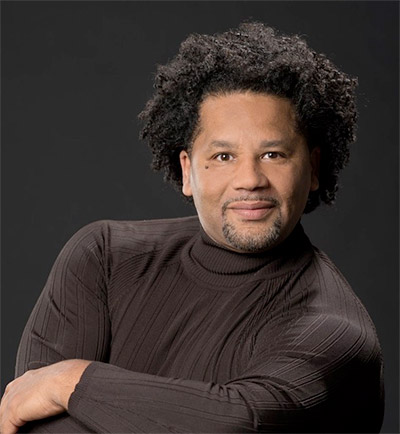 Executive Artistic Director/ Choreographer of Creative Outlet, Jamel Gaines has dedicated his life to delivering artistic excellence and stirring, soaring performance to audiences everywhere. With more than 28 years of choreographing experience, Jamel seeks to inspire, motivate and nurture dancers and artists. Jamel's choreography includes Spike Lee's "Annual Tribute Concert to Michael Jackson" and televised choreography on "So You Think You Can Dance."

In addition, Mr. Gaines has created and staged over 25 repertory and concert productions in NYC and around the globe. He has worked with distinguished artists such as as Jennifer Holiday, Michael Jackson, Whitney Houston, Savion Glover, Malik Yoba, George Fasion, Ornette Coleman, Ossie Davis, Olatunje Babatunde, Max Roach, Cassandra Wilson and Rick James. Additionally, he has taught and choreographed dance for productions in Jamaica, Guadeloupe, Spain, Germany, Canada, Italy, London, and Portugal. Jamel has appeared on Public Television's "American Talent" in which he was presented The Teacher Recognition Award, during the Presidential Scholars in the Arts Committee at The Kennedy Center, and has been featured in publications by Essence Magazine, The New York Times, The Seattle Times and The Daily News.

His work has been staged by the Actors Theater Workshop, The NYC Department of Parks, Alvin Ailey American Dance Center, the Paramount Theatre and The Martha Graham School. Most recently, his works have been presented by The JOYCE Theater, The Seattle Theatre Group, SummerStage: Central Park, SummerStage: Marcus Garvey Park, Outdoors at Lincoln Center, The Jamaica Dance Festival, BAM Harvey, Aaron Davis Hall, Symphony Space, The Brooklyn Center for the Performing Arts as well as many others. Mr. Gaines serves as the director of St. Paul's Eldad Medad Dance Ministry, St. Paul's. This includes "He Got Up", the commemoration of the African Holocaust and the acclaimed "Black Nativity" for which he won an Obie Award.