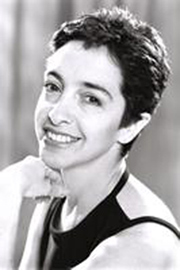 "Brenner's fierce, liquid voice is commanding... a witty, winsome performer, adept at teasing out the ambiguities of any given moment."
-Claudia La Rocco, THE NEW YORK TIMES, New York 2009

JANIS BRENNER is an award-winning dancer/choreographer/singer/teacher and is Artistic Director of Janis Brenner & Dancers in N.Y. She has toured 34 countries and is recognized as a "singular performer" (Eye On Dance) with a multifaceted artistic range. Ms.Brenner's awards include a 1997 NY Dance and Performance Award (a "Bessie") for "Outstanding Creative Achievement" in Meredith Monk's work "The Politics of Quiet", a 1999 "Bessie" nomination for her performance in "Solo for Janis" choreographed by Richard Siegal, a 1996 Lester Horton Award for "Outstanding Achievement in Choreography" in L.A., the 2010 Copperfoot Award for "Lost, Found, Lost" at Wayne State University, a 1993 Leach Fellowship for "Outstanding Achievement in the Performing Arts" from Empire State College and a NY Dance On Camera Festival award (1986).

Ms. Brenner performed with Meredith Monk and the Vocal Ensemble from 1990 - 2005 (recording on ECM Records) and performs an acclaimed vocal suite from Monk's Songs from the Hill in concert. She and composer/vocalist Theo Bleckmann have recorded their work Mars Cantata available on CD at Brenner's website. She has been co-choreographer for Michael Moschen (1988-92: BAM's Next Wave Festival, US tours and PBS' Great Performances), a soloist with Annabelle Gamson' s company (1984-87) performing historic repertory of Mary Wigman, Duncan and others, and a soloist with the Murray Louis Dance Company (1977-84) working with Rudolf Nureyev, Placido Domingo, Dave Brubeck Quartet, Joseph Papp, Bat Sheva Dance Company in Israel and Alwin Nikolais. She has restaged Louis' repertory throughout the world, most recently through an National Endowment of the Arts "American Masterpieces" grant to stage Porcelain Dialogues at the University of Hawaii at Manoa, 2011.

In February 2007, "Janis Brenner & Guests: A 25th Anniversary Celebration" was presented by Danspace Project in NY, receiving great critical acclaim and the opportunity for Brenner to thank and perform with the numerous, outstanding artists who have enriched her career and work. (See "Reviews") In November 2009, Joyce SoHo presented the company in "5 Decades"; 5 works including Meredith Monk's seminal solo Break from 1964 revived and performed by Brenner, solos from Murray Louis' acclaimed 1978 work Figura performed by JB&D company members, and 3 of Brenner's works, one each from 1985, '95, and the premiere of Dancing In Absentia: An Homage to the artists lost to the AIDS Epidemic. (See "Reviews"). In April 2011, the company presented "5 Decades II", again to critical acclaim, premiering The Mind-Stuff Variations with a commissioned score by Jerome Begin ("...profoundly moving", Eva Yaa Asantewaa, INFINITE BODY). Ms. Brenner opened the concert performing 2 of the Wigman solos she first danced in the mid-'80's, as well as presenting the revival of Louis' Duet from Cleopatra, and Brenner's Duet from Pieces of Trust and signature work heartSTRINGS (See "Reviews").

In 1998 Ms. Brenner had her first two memoir essays published by DanceView Magazine in Washington, DC. In 1997 BUZZ Magazine in LA wrote, "Dancer, choreographer, singer - Brenner is that rare contemporary performer who can do it all." She was on the Board of The Gender Project in NY, which sought to empower women in dance. In May 2006, she was inducted into the Farmingdale High School" Wall of Fame" on Long Island as an honored alumni. Ms. Brenner received her MFA degree from the Hollins University/ADF graduate program in 2009. She has been on the faculty of The Juilliard School since 2009, serving as Choreographic Mentor for the Choreographers & Composers course as well as "Creative Process" instructor. She also served as Director of Choreography for Regional Dance America's "Craft of Choreography" Summer Intensive, 2010, 2011.