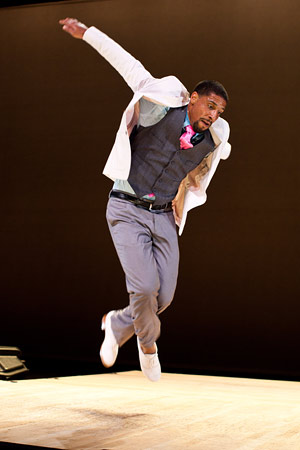 Jason Samuels Smith has emerged as a multi-talented leader in the art form of Tap. He received a Dance Magazine Award, Emmy and American Choreography Award, as well as grants/residencies supporting the development of previous work. Choreography and film performances include CBS's "Secret Talents of the Stars" (MYA), "So You Think You Can Dance", "Dancing with The Stars", Dean Hargrove's "Tap Heat", Outkast's "Idlewild", and Debbie Allen's "Cool Women". Stage credits include Soul Possessed (leading role), Broadway's Bring in Da'Noise, Bring in Da'Funk (principal/lead roles), and Imagine Tap! (leading role). He continues to tour the world with his tap company A.C.G.I (Anybody Can Get It), India Jazz Suites with Pandit Chitresh Das and JaJa Productions Band. As a humanitarian, he has supported Dancers Responding to Aids, Tied to Greatness, Career Transitions for Dancers and Tap Into A Cure, and helped develop Tap Dreams, offering global exchange opportunities for international tap dancers to attend major tap festivals within the US. He has also designed and developed a professional tap shoe sold exclusively by BLOCH. Jason aims to promote respect for dance and create opportunities as an ambassador for tap around the world.