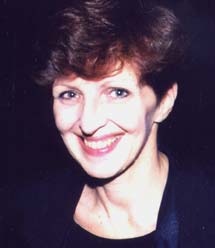 JENNIFER MULLER, an influence in the dance world for over 40 years, is known for her visionary approach and innovations in dance / theater, multi-discipline productions, incorporating the spoken word, live and commissioned music, artist-inspired decor and unusual production elements, Muller has defied convention and created a distinct signature style, educational approach and philosophy. Artistic Director of Jennifer Muller/The Works since its inception in 1974, she has toured to 39 countries on four continents, 30 States and produced 22 NYC Seasons at the Joyce, City Center, the New Victory Theaters, among others. She has created over 100 works including 7 full-evening productions, collaborating with such artists as Keith Jarrett, Yoko Ono and Keith Haring.

Her prolific career in dance was recently celebrated at the Transformation & Continuance: Jennifer Muller & the Reshaping of American Modern Dance, 1959 - Present academic conference and retrospective art exhibit at University of California-Santa Barbara. In 2007, The Joyce awarded Ms. Muller with a Commissioning Grant to create Bench as part of the Joyce's 25@25 Initiative. She was selected in 2003 as a Founding Member of the World Arts Council, one of 30 artists and the only American representing the dance field.

Internationally renowned as a consummate teacher and mentor of creative talent, Ms. Muller has developed a personalized technique, now taught worldwide, and innovative programs in creative thinking. In 2009, Muller Polarity Technique - was featured in the publication and video Tanztechnik, a comparative study of seven unique contemporary dance techniques, alongside Cunningham and Limon techniques. During The Works' Brazil Tour, Ms. Muller was awarded the FENDAFOR 2010 Trophy of Cultural Responsibility, in recognition of her invaluable contributions to promoting dance and education throughout South America.

Her choreography has been commissioned by 24 international repertory companies including Alvin Ailey American Dance Theater, Nederlands Dans Theater, NDT3, Ballet de Nord and Ballet Contemporaneo Argentina. Her work for theater and opera includes such venues as The Public Theater, Second Stage, New York Stage and Film and the Metropolitan Opera. She recently choreographed the World Premiere of The SPIRAL Show, which opened a new theater in Sanya, China in September 2011. Creating work since she was 7 years old, her work has been seen in 44 countries.