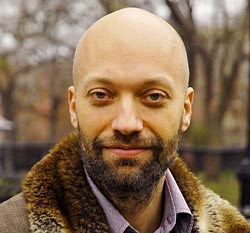 Johannes Wieland (artistic director) is the Artistic Director/Choreographer of the resident dance company at the State Theatre of Kassel, Germany. A native German and former principal dancer with the Béjart Ballet Lausanne and Berlin's State Opera, he established his company, johannes wieland, in New York in 2002. Since then, he has been developing a singular body of work that has garnered critical acclaim from The New York Times, Time Out New York, The Village Voice, and many other national and international publications, amongst them Dance Magazine, which cited him as one of the "25 to Watch" in January 2003. His duet, shift, won Germany's 2004 Kurt Jooss Prize and he is also a winner of the 2004 Hubbard Street 2 National Choreographic Competition.

In addition to leading his own companies, Wieland was Associate Artistic Director of PARADIGM (New York), and is a guest choreographer and teacher at companies and schools around the world. He holds a BFA from the University of Amsterdam, and an MFA from NYU/Tisch School of the Arts.

Partnering/Improvisation Workshop:
During the classes, phrases will be created in a collaborative process and we will experiment with related movement ideas and explore their possibilities. The classes will help to build a relationship of trust and getting familiar with the weight of your partner; we will deal with basic principals like weight sharing, working with a common balance and moving in a common rhythm, and we will explore relationships between couples such as dependency, manipulation and support.