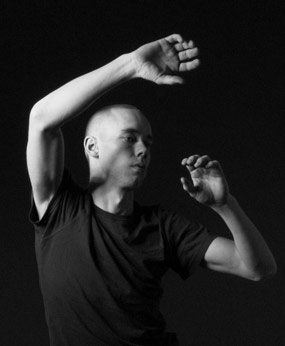 Jon Ole Olstad started dancing at 16, realizing it to be his greatest passion. He was accepted into the National Academy of the Arts in Oslo, graduating with a bachelor's degree in 2009. After college, he was hired for the tour project "Kamuyot", a collaboration between the Swedish Riksteatern, and Batsheva Dance Company, led by artistic director Ohad Naharin. In 2013, Jon Ole was hired by Nederlands Dans Theater 1, led by artistic director Paul Lightfoot. In NDT1, he had the honor of working with Paul Lighfoot and Sol Leon, Johan Inger, Hofesh Shechter, Marco Goecke, Alexander Ekman, Jiri Kylian, Mehdi Walerski and Crystal Pite. His own choreography has been presented at several festivals, venues and choreographic competitions; Cross Connection Comes Choreography Competition in Copenhagen, Stockholm Dance Film Festival, and Ravnedans Contemporary Dance Festival in Norway. In 2015, he presented his solo "and we already knew the names" at the prestigious International Solo Tanz Competition in Stuttgart. He was awarded 1st prize dancer and choreographer and toured in Germany, Brazil and NYC.

In 2009, he started teaching to share his knowledge and his love of dance. He has taught and choreographed at numerous colleges: Juilliard, NYU-Tisch, Marymount Manhattan College, Alvin Ailey and Lines Ballet. He has given company class to Gallim Dance, Ballet Hispanico, BODYTRAFFIC and Theater Regensburg Tanz. He is a highly sought out teacher and is on Faculty for acclaimed professional Dance studios, such as Edge PAC, Movement Lifestyle, Millenium Dance Complex, Peridance, and Broadway Dance Center. He is also faculty with the ArtÉmotion Summer Intensive- Ballet West, Joffrey Ballet Intensive, World Dance Movement Festival in Italy and NUOVA OFFICINA DELLA DANZA. Across The U.S he has mentored at Michelle Latimer Dance Studios (Top Five at the Studio of the Year Dance Awards 2014, 2016) Prodigy Dance (Studio of the year 2014 Dance Awards Dance Awards ) Dance Studio of Fresno (Studio off the year 2015 Dance Awards and Top School and Top Ensemble YAGP) Jon is currently living in New York City where he keeps developing his teaching, choreographic work, and dancing with different choreographers and crossover projects with film and photography.