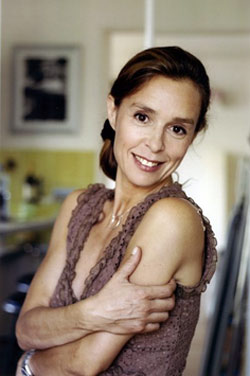 Karin Averty was born in France on February 25. 1963. Her ballet training began in 1972, at age 9, with Yvonne Goubé at the Centre de Danse de Paris. One year later, in 1973, she was admitted to the Paris Opera Ballet School and joined the company in September 1979 at age 16.

In July 1980, she received international recognition early in her career when she won the Grand Prix, junior category, at the International Ballet Competition in Varna. In June of 1983, at the Paris Opera Ballet. she rose to Premiere Danseuse.

In 1986, the Paris Opera Ballet Friends Association (AROP) awarded her its Prix du Public. The following year, William Forsythe chose Karin to be in the original cast of Somewhere in the Middle.

In 2003, Karin received her official ballet teaching diploma, the Diplöme d'Etat de Professeur de Danse. In 2004, the Prime Minister of France honored her with the National Merit Order as a Chevalier (Knight).

For her farewell performance at the Bastille POB on July 9. 2005 Karin danced Juliet in Rudolf Nureyev's version of Romeo and Juliet. In February 2009 her last appearance as a guest artist was in Tokyo. There she performed in Bronislava Nijinska's Les Biches with the NBA Ballet Company to celebrate the 100th Anniversary of Serge Diaghilev's Ballets Russes.

Since 2009, Karin has been a free-lance ballet teacher and coach for ballet companies, universities and ballet schools. She has taught in France, Korea, Japan, Canada and Israel.

In 2012 she realized one of her dreams and relocated to New York. She began teaching at a number of well-known dance schools throughout the US, among them: Juilliard, Alvin Ailey, ABT/JKO, The Rock School, and the summer intensive programs of the Boston Ballet, Ballet West and Kansas City Ballet. She has served as a judge for international ballet competitions such as Varna and the Youth America Grand Prix.

In September 2016-2019 Karin joined the ABT JK School as a Ballet faculty Pre- Professional division. In 2018 she staged Mikko Nissinen's Raymond 3rd Act at the Boston Ballet School and her own version of Paquita Grand Pas at the Joffrey Ballet Academy of Dance, Chicago. In 2018-2019 Karin was a Guest Ballet teacher with ABT Company.

In January 2019 she was invited by Ballet West Artistic Director Adam Klute to coach his principal dancers with his Spring production of Giselle. From September 2019- March 2020 Karin was appointed ABT Studio Company Ballet Mistress. Ballet West Academy and The Florida Ballet invited Karin to teach for their Summer programs 2020.

From January through March 2021 Boston Ballet invited Karin to work on their digital program "The Art of Classical Ballet" as a Guest Rehearsal Director. During the Summer of 2021 Karin taught at Nashville Classical Ballet Academy, Ballet West Academy, The Florida Ballet, Boston Ballet School, The Dallas Conservatory Summer programs.

On their Fall season 2021 and Spring season 2022 Boston Ballet welcomed back Karin as a Guest Rehearsal Director. In April 2022 Karin was invited to ADC/IBC Competition in Saint-Petersburg Florida to coach competitors.

Karin is a Steps on Broadway Ballet Faculty teaching on Friday and Sunday In-Studio and Virtual Open classes.