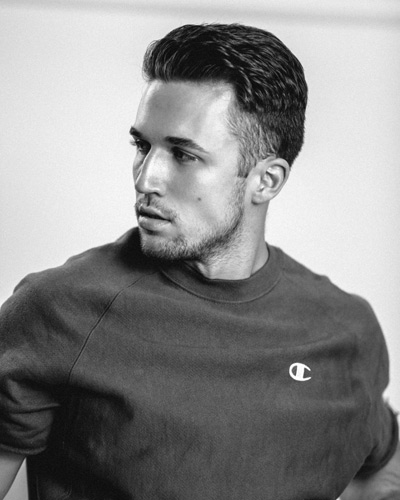 Madison Ingles was raised in the small town of New Baltimore, Michigan, and began dancing at the age of 6. He trained in jazz, contemporary, ballet, hip hop, and tap through his formative years. From an early age, he developed a love for classic jazz. He has been mentored by some of the best teachers in the business, namely Sonya Tayeh. In 2011, at the age of 17, Madison moved to Los Angeles to pursue his dance career on the Edge Performing Arts Center Scholarship Program. He is represented by Clear Talent Group and has toured internationally to Europe, Asia, Canada, and South America dancing and teaching what he's learned through experience.

Throughout his career, Madison has had the privilege to work for top choreographers such as Marguerite Derricks, Fatima Robinson, Nick Kenkel, Ricky Hinds, Sean Cheesman, and Doriana Sanchez, to name a few. He's danced on stage and video w/ Dua Lipa, Mariah Carey, Nelly Furtado, Jesse McCartney, Snoop Dogg, and more. He's performed in venues around the world such as Mercedes Benz Arena, Staples Center, The Plaza Hotel, Ford Field, Hammerstein Ballroom, and Vienna City Hall. He has danced in spots for Saks Fifth Avenue, MasterCard, Cartier, GAP, Toyota, Bulgari, Paul Mitchell, Just Dance Video Game, etc. Madison has been featured on stage, television, film, and can be seen dancing on HBO, Disney Channel, and Netflix. He currently resides in New York City where he is on faculty teaching at Steps on Broadway, under the direction of Joe Lanteri. He is also dancing on current episodes of Saturday Night Live on NBC. He loves teaching dance, judging, and choreographing as much as he can. His main goals through teaching are mentoring and fueling a dancer's love for classical and new movement alike.