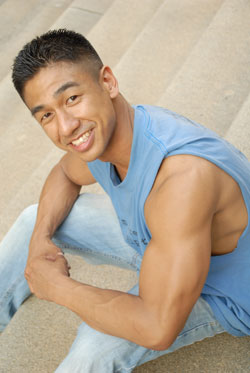 Matt Lopez first started dancing at the age of 10, performing for a Filipino dance troupe in New Hampshire. He attended Northeastern University in Boston majoring in theatre and later transferred to the University of Central Florida. While in Florida, Matt performed at Walt Disney World and had the opportunity to perform with Hillary Duff in the Christmas Day Parade televised on ABC.

Upon graduating from Central Florida, Matt landed a job as the mascot for the New England Patriots. In the spring of 2010, he was featured in the Go-Go Segment on "Live with Regis and Kelly." His other notable past stage/television performances include dancing for Sean Kingston and Wyclef Jean on a kids programming show on PBS, as well as for Demi Lovato on ABC's "Good Morning America."

Matt now lives in New York City where he is dancing and choreographing with his partner, Melissa Ramos-Lopez, who previously danced for the NBA's Brooklyn Nets. In April 2012, Lopez was the audition facilitator for a Nicki Minaj performance and chosen as a lead dancer in Times Square for the debut of her album, "Pink Friday: Roman Reloaded." Matt is currently a choreographer for the cheerleaders of the five-time Super Bowl Champions, the New England Patriots. He has also choreographed for the pre-game performance at Madison Square Garden for the New York Knicks and for R&B/Pop artist, Sid Haywoode, whose song, "No Excuses" was #6 on Europe's dance hit chart.

Lopez has taught hip hop/funk master classes across the United States and abroad in the Philippines, Japan, Colombia, Israel, Canada and the United Kingdom. In 2015, he was selected as one of the Top 12 Dance Convention Teachers in the U.S. by Dance Informa Magazine. Lopez currently teaches for group services at Broadway Dance Center and is teaching hip hop and street jazz on faculty at Steps on Broadway, Sarah Lawrence College, Dalton School, NY Film Academy and Wagner College.