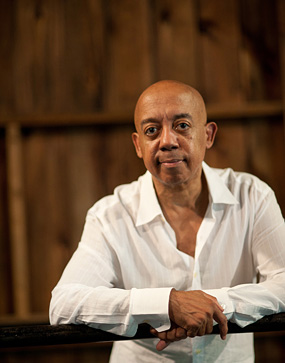 Milton Myers received his BFA from the University of Missouri at Kansas City. He was a founding member, performer and assistant to the director with the Joyce Trisler Danscompany, and performed with the Alvin Ailey American Dance Theater. Milton, upon the death of Joyce Trisler, was also the artistic director of the Joyce Tristler Danscompany for seven years. He has taught for Ballet Hispanico, New Danish Dance Theatre, Les Ballet Jazz de Montreal, Bat-Dor, Batsheva, Kansas City Ballet, Matthew Bourne's Male Swan Lake Company on Broadway, Ballet Stagium in Sao-Paulo, Brazil, Danny Grossman Company and Ballet Creole in Canada. He is a professional instructor for the Alvin Ailey American Dance Theater and has been an instructor and resident choreographer for the Philadelphia Dance Company, Philadanco, since 1986.

Milton has been an Artist-in Residence at the Juilliard School, North Carolina School of the Arts, Brown University, Howard University in Washington DC, the New York LaGuardia High School of Performing Arts, the School of Toronto Dance Theatre in Canada, and the Dance Masters at Wesleyan University. City College of New York, Marymount Manhattan College and University of the Arts in Philadelphia. Milton is currently on faculty at the Juilliard School being the first Horton teacher and first African American male on dance faculty, the Ailey Fordham University program, Steps on Broadway and Peridance in N.Y.C. He is preparing to return to the Jacob's Pillow Dance Festival where he has been director of the modern and contemporary programs for twenty six years.

Milton was commissioned to choreograph Duke Ellington's Sacred Concert for Philadanco and the Duke Ellington Orchestra at Philadelphia's Academy of Music, the 55th anniversary of the Philadelphia Orchestra with Philadanco at Academy of Music and for Ailey 2 and Jessye Norman at Carnegie Hall. His choreography has earned him recognition and funding from the National Endowment for the Arts, New York State Council, CAPS Choreography Award (funded by the Rockefeller Foundation), Phillip Morris New Works Fund, Dance USA/Philadelphia Dance Alliance and Jacob's Pillow. The International Association of Blacks in Dance honored Milton Myers for his artistry and contribution.