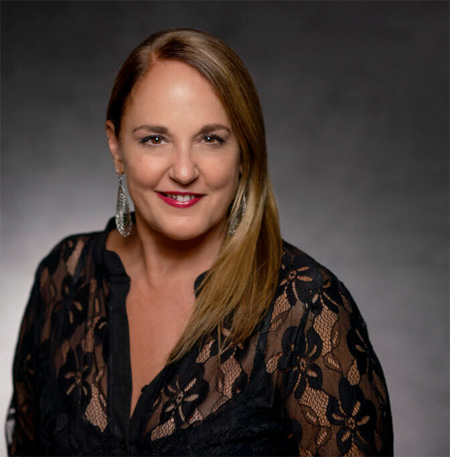 At the helm for 36 years, Nan's leadership of Giordano Dance Chicago began in 1985 as Associate Director, and in 1993 she was appointed to the position of Artistic Director. Nan was trained by her father and mentor, Gus Giordano, who created the world-renowned Giordano Technique. Developer of the Nan Giordano Certification Program®, Nan is the world's preeminent authority on the essence, discipline, progression and continuance of the Giordano Technique; the vision of the NGCP® is to provide worldwide, ongoing, and in-depth access to this ground- breaking dance form.

She had an extensive performing career in concert dance, as well as in the industrial and fashion worlds. Before taking the reins on the artistic side, her concert dance experience began with Giordano Dance Theatre, apprenticing and then joining GDC. With her father at the helm of the company, she traveled and performed extensively around the world; she also had the opportunity to perform in numerous WTTW dance television specials choreographed by her father including the Emmy Award winning The Rehearsal.

When an injury ended her performing career in 1985, Nan became Associate Director of the company and was instrumental in establishing a working Board of Directors, which has evolved into today's three separate boards. In the last thirty-six years, under Nan's direction, GDC has established a high-profile reputation for excellence in the Chicago dance community, as well as in the national and international dance worlds. Nan has guided the development of a large and diverse repertoire. Nan's concert choreography credits include five works in GDC's repertoire.

On the commercial side Nan has choreographed several television commercials. Nan teaches master classes throughout the United States, and has toured internationally as guest teacher in many countries including Brazil, Canada, Costa Rica, El Salvador, France, Germany, Guatemala, Mexico, and Israel. She is also the driving force behind Jazz Dance/Science & Health, GDC's outreach program in three underserved Chicago Public Schools. Nan received the Manford Byrd Jr. Wizard of Oz Award for Outstanding Service from Howland School of the Arts. Nan is Artistic Director of Jazz Dance World Congress (JDWC), an event that draws dancers, choreographers, and teachers from more than 30 countries. Nan served three years on the Illinois Arts Council Dance Panel and also served on the Community Arts Assistance Program Dance Panel for the City of Chicago, Department of Cultural Affairs. She currently serves on the International Ballet Competition, National Honorary Committee and the Advisory Board for Dance Magazine. Nan was also honored by Mayor Rahm Emanuel, who declared June 9, 2018, Nan Giordano Day for her leadership and contributions to the Chicago community. In August 2018, Chicago Dancers United honored Nan (along with Lou Conte) with the Dance for Life Impact Award, recognizing her contributions to the Chicago dance community and Dance for Life. In celebration of Nan's landmark year, the Chicago Tribune released their "2018 Chicagoans of the Year" of which she was spotlighted as the city's "Dance" honoree. In summer of 2019, Nan was honored with the Grace Wakefield Lifetime Achievement Award by Star Dance Alliance at the Circle of Excellence Gala. Most recently Nan launched a virtual project in Latin America, Illuminate the Possibilities, in partnership with DUBOFORCE.