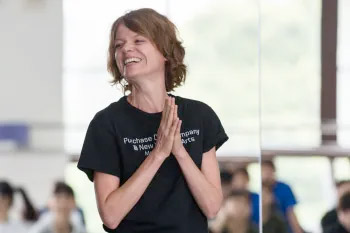 Nelly van Bommel was selected as one of Dance Magazine's '25 to Watch' in January 2010. Her work has been featured in France, Taiwan, Canada and the US in major venues and festivals. A native of France, Ms. Van Bommel moved to the US in 2002 thanks to a fellowship from the Conseil Régional d'lle de France. Upon completion of the MFA dance program at Purchase College, she was presented with an Outstanding MFA Graduate Award for excellence. Ms. Van Bommel is also an alumna of Jacob's Pillow Dance Festival, as recipient of a full scholarship. In spring 2007, Ms. Van Bommel won 1st Jury prize at the Genesis International Choreographic Competition organized by the Milwaukee Ballet. Also in 2007 she was a finalist at the A.W.A.R.D Show in NYC. She has been an artist-in-residence at Kaatsbaan International Dance Center and the Stella Adler Studio of Acting (MAD AIR), a guest choreographer at Springboard Danse Montreal, and a guest teacher at the Taipei National University of the Arts where her work has been presented at the Kuandu Arts Festival. In spring 2010, Ms. Van Bommel was one of the three choreographers selected for Ballet Austin's biennial choreographic projectNew American Talent/Dance. Her most recent workPinguli, Pinguliwas choreographed for the Baryshnikov Arts Center Fall Gala premiered on September 20, 2011. Upcoming projects include a new production ofHansel and Gretelfor Ballet Austin II in the spring of 2012.