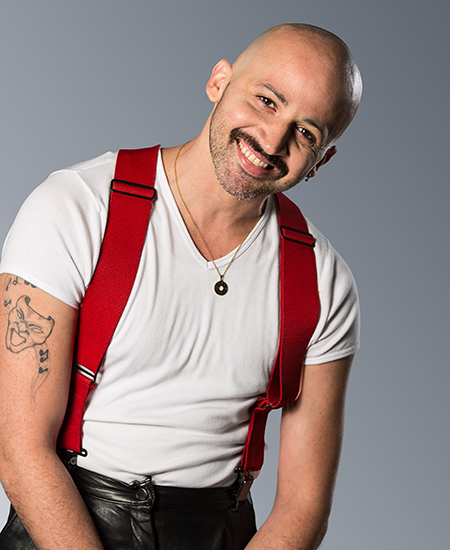 Noel Bajandas was born and raised in Union City, New Jersey, a town just outside of the bustling streets of New York City, which made an indelible impression on his innate creative talent.

With 2 decades teaching, choreographing, and being able to perform on every platform since the age of 14, Noel Bajandas has been able to develop an approach to dance that is very much stylized to who he is as an artist. As a professional dancer and choreographer, Noel Bajandas has had the pleasure of working with Recording Artists such as Madonna, Adam Lambert, Toni Braxton, Miley Cyrus, Eminem, Snoop Dog and Thalia to name a few. He has appeared in many films, including Oscar winner for Best Picture LA LA LAND, In The Heights as well as The Spongebob Movie: Sponge On The Run, commercials and a number of television shows such as Dancing With The Stars, So You Think You Can Dance and The Big Bang Theory. He is proud performer of Cirque Du Soleil's first arena touring show Delirium as well as choreographer for the EMMY winning HULU show East Los High. Noel also placed TOP 3 on Every Single Step, a choreography competition show created and produced by Nigel Lythgoe and hosted by Brain Friedman. Noel made history with pop star Kim Petras, when he choreographed her show stopping VMA Performance at the 2021 VMA's as well as her 2021 EMA's performance in Budapest. Noel won the award for BEST CHOREOGRAPHY IN A MUSIC VIDEO for his work in SuperFruits "The Sweet Life" at the World Choreography Awards.

As a dance teacher, Noel's goal is to create an environment that promotes education, growth and a good time. Some of the many dance elements on which he focuses in class are House, Hip Hop, Freestyle, Funk, Latin, Street Jazz and Waacking, all with the goal of getting students to understand what it takes to truly become a masterful performer. He believes that while having the ability to dance is amazing, it is equally valuable to break down movement and thoroughly explain the translation that's taking place between creativity, the thought process and the body. Each and every one of his students walk away with a sense of accomplishment and the determination to continue building off of their own creativity.