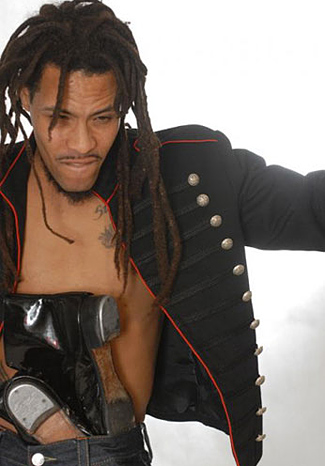 Omar Edwards is a gifted dancer/entertainer/musician who has been in love with Tap since he was 12 years old. Born in Brooklyn, New York, Omar draws his dancing from 23 years of experiences and formal training; experiences with masters like Henry Letang, Jimmy Slyde, and Marie Brooks. For the last seven years, Omar has trained under the tutelage of the great musician/songwriter Olu Dara. In 1994, Omar earned national acclaim when he and then Tap partner Daniel B. Wooten Jr. won 13 times including the grand prize on the famed T.V. show "Star Search". From that time on, Omar has embarked on a Tap Dance career that spans the world of music, dance, television, theatre, and film. In 1998, Omar took 4 musicians into the recording studio to record a Tap Dance album entitled "Tap Dancin is Music", making Omar the first of his generation to release an album where the Tap Dancer is the leader of the band as well as the lead instrument.

Omar has taken his foot music, which he now calls "Afro Feet: Music and Beyond", to over 20 countries. Places like Australia, Japan, Germany, Portugal, and many more. His other accomplishments include an international tour of the hit show "Black and Blue" and featured dancer in the Broadway show "Bring In Da Noise, Bring in Da funk". He also starred as the "Sandman" on the legendary T.V. show, "Showtime at the Apollo" for seven years and was featured in the musical movie "Camp". Some of his concert credits would include performing with Alicia Keys live at the Hollywood Bowl anddancing on record with rappers Common and Mos Def on a song called "The Questions". He has performed with Savion Glover live at the White House and was also a featured guest on the "Ellen DeGeneres Show". In the past few years Omar has changed his view of what he is and what he does. "I'm not a Tap dancer although I use the Tap Dance vocabulary to transcend my experience to the audience. My feet sing, recite poetry, they groove, and tell stories. My dance is called "Afro Feet". It's another way to approach and conceive the dance...."