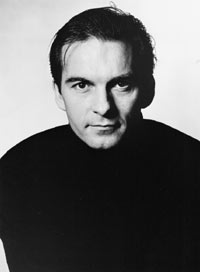 Pascal was born in Normandy, France. He earned a Masters Degree in Science Education from the University of Paris and in 1981 he was awarded a fellowship from the French Ministry of Culture to study dance in New York City. He performed with the companies of May O'Donnell and Paul Sanasardo before joining the Martha Graham Dance Company in 1986. As a principal dancer, he interpreted many of the most prestigious roles in the Graham repertory and in 1990 Miss Graham created the central role (Death Figure) in her ballet Eyes of the Goddess for Pascal. He performed opposite Mikhail Baryshnikov and Joyce Herring in El Penitente and was featured in two TV specials: "Martha Graham in Japan" and "Five Dances by Martha Graham" at the Paris Opera. Pascal began choreographing in 1989 while still a member of the Graham troupe, and produced his first concerts at the Theatre of the Riverside Church in 1991 and 1992. His pieces Narayama and Harvest were danced by the Graham Company during its New York City seasons at City Center. As of 1994, Pascal has dedicated his energies to building a choreographic style of his own, an ensemble of dancers and the Pascal Rioult Dance Theatre. Pascal's work has been performed and/or commissioned by numerous modern dance and ballet companies in the United States and in Europe including the American Dance Festival, Cal Performances and Theatre de Saint Quentin en Yvelines. He is the recipient of a 1998 and 2002 Choo-San Goh Award for Choreography.