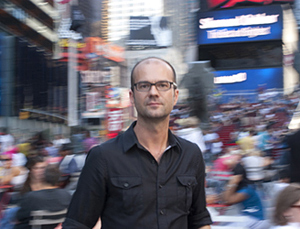 Pavel Zustiak is a choreographer, dancer and sound designer living in New York City. He was born in the former Czechoslovakia where he received his first dance training. At the age of seventeen he made his choreographic debut with a work for 23 dancers of the Tremolo Dance Company set to M. P. Mussorgsky's music "Pictures at an Exhibition." He appeared in the children's TV series "Golden Gate" for seven years and in numerous TV and radio plays. Zustiak received his MBA in 1993 and moved to study dance composition and production at the School for New Dance Development in Amsterdam.

Zustiak was awarded a prestigious 2007 Princess Grace Choreography Award to support his collaboration with Laboratory Company Dance in Pittsburgh, PA, and was a finalist in the 1999 Choreography Competition in Amsterdam for "Wrinkle in Time." He also received 2006 Jerome Foundation Travel and Study Grant that allowed his dance research in Vienna, Austria and Brussels, Belgium.

Zustiak choreographed for the Yale University production of "Edward II" (2006) and Bertold Brecht's "Baal" (2007). He was commissioned by Of Moving Colors Productions in Baton Rouge, Louisiana to choreograph three dance theater pieces: "Search" (1999), "Within Without" (2001) and "All That I Can't Leave Behind" (2005). In December 2007, Zustiak choreographed "(S)even," a work commissioned and performed by Laboratory Company Dance in Pittsburgh, PA.