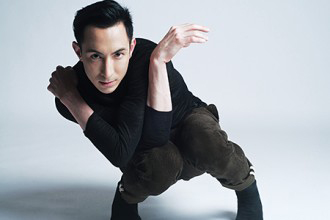 Peter Chu, originally from Cocoa Beach, Florida is a distinguished artist who strives to push the physical bounds of dance. He began his training as a competitive gymnast, later nurturing his artistry at Dussich Dance Studio where his evolution into dance began. As a BFA student at The Juilliard School (under the direction of Benjamin Harkarvy), Chu was pushed further as a technical mover and began an explosive journey into choreography. Upon graduation, he was awarded the Hector Zaraspe Prize for Choreography.

In 2008, Chu formed a Las Vegas project-based company-chuthis. His multi-disciplinary dance company combines innovative lighting and sound with live contemporary movement. The company performed its wildly popular show Nothing Sticks in both NYC and Vancouver, BC, Canada. Chu presented his newest works, Face Her and Smile Masking, under a residency partnership with the Las Vegas-Clark County Library District and later premiered the works at Festival International DansEncore.

Recipient of the 2010 A.C.E. Capezio Award, Chu was also honored as selected choreographer for the Perry-Mansfield New Works Festival (directed by Linda Kent) and choreographed for the ninth and tenth seasons of "So You Think You Can Dance". He has created pieces for Naomi Stikeman (Çaturn; consulted by Robert Lepage), Orlando Ballet Theatre, Hubbard Street 2, Giordano Dance Chicago, Houston Met Dance Company, and New Dialect.

As a performer, Peter has danced with BJM Danse, EZdanza, as the lead in singer Christina Perri's "Jar of Hearts" music video, in Celine Dion's Vegas spectacular "A New Day", and with Crystal Pite's company, Kidd Pivot.