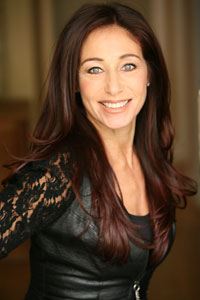 roberta mathes, born and trained in NYC, received a BA in dance from Adelphi University and has a distinguished career in the performing arts, both in front of the audience as a performer, and behind the scenes as a choreographer/coordinator. Her litany of achievements include work in several feature films, Beat Street, Fatal Attraction, in television programs, "The Guiding Light", "Law and Order", and in award winning music videos, "Higher Love" (Steve Winwood), "Heard it through the Grapevine" (Marvin Gaye). She has also performed in shows, Sweet Charity and Kismet, in major industrials for IBM and Chrysler, in special events including the Broadway opening of Disney's film Hercules, the Liberty Bicentennial and most recently in an off off Broadway play, Invisible Child. One of roberta's outstanding credits was as assistant choreographer in Brian de Palma's film Carlito's Way. While directing beyond dance @ bergenPAC, roberta remains on the faculty of Steps on Broadway, NYC and American Ballet Theatre's Summer Intensive, NYC. roberta co-directed her own school, dance plus. . .a whole lot more for thirteen years and has been a guest teacher in Israel, Italy, Canada, Norway, Venezuela and Brazil. Her strength as a dancer and choreographer is her versatility in style. However, roberta feels that her best achievements lie in the area of teaching dance as mentioned in a feature article in the February 2000 issue of Dance Teacher magazine and cover articles of the May 2007 issue of Englewood Magazine and June 2008 issue of 201 Magazine. roberta was fortunate enough to be part of ABT's "Make a Ballet Program" and her choreography was presented at the Metropolitan Opera House at Lincoln Center. She loves watching her students grow into expressive successful dancers. Many of roberta's students have graced NYC stages and have performed on Broadway in Les Miserables, Sound of Music, Footloose and Spring Awakening. One of her students, Meredith Akins, former dance captain of the Broadway hit Mamma Mia also performed in the Chicago production of Wicked. roberta's dynamic personality, along with her own "technique", forms a whole and responsive learning experience.

class description: roberta developed a strong training system, a jazz "technique" which emphasizes correct body alignment, abdominal and core strength, centering and hip placement, (for the advanced beginner through professional). Her approach is to "instruct" while offering diversified and challenging choreography in an earthy, passionate and soulful style. "My goal is to make everyone of my students physically strong, mentally focused and technically perfect!" Free your body of those bad habits and expand your abilities!!!