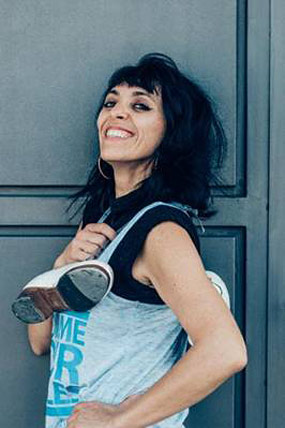 Sought after for her exceptional improvisational skills, tap dance artist Roxane Butterfly has been a leading figure on the world tap stage for the last two decades (both in America and Europe). Very first woman to win a Bessie Award (1998) in the history of tap, she represents a direct link to the generation of her mentors, the Original Hoofers. She is known to constantly push the art-form further while passing on the knowledge of her masters. Baptized "Butterfly" by legendary Jimmy Slyde in the early nineties, she is the only European woman who has had a recognized tap career in America and to have received high marks of artistic distinction such as a John Simon Guggenheim Fellowship (2006).

Roxane has brought tap to many international dance festivals and venues such as the American Dance Festival in Durham (2004), Harkness Dance Festival (NY, 2005), ImpulsTanz in Vienna (Austria, 2002), DanceSalad (Houston 2002), Institute del Teatre (Barcelona 2010). She is the only woman of her generation who has led a worldwide solo career under her own name, presenting original work in Africa, the Middle East, Europe, South and North America, Asia and the Caribbean.

In the New York of her youth, she was fortunate to dance with some of the most famous musicians in the world such as George Benson, James Carter, Stanley Jordan, Roy Haynes, Phil Woods, Benny Powell, Les Paul to name just a few. She was a featured soloist with the New York Virtuosi Orchestra, Stamford Philharmonic, the Cab Calloway Orchestra, Indianapolis Symphony Orchestra and was invited to numerous festivals like Jazz à Toulon, The Nice Jazz Festival, Festival d'Un Monde á L'Autre (Lyon, France ), Clifford Brown Jazz Festival (USA), Nuits D Afrique at Kola Jazz (Montreal), Summerstage (Central Park 2006), Lincoln Center Outdoors (NY 2007). Such experiences have had music critics compare her to musicians such as John Coltrane and Steve Reich. She was also fortunate to collaborate throughout two decades with the pioneering and critically acclaimed production of Tamango s Urban Tap.

In 2005, she attracted to Barcelona American fundings to work on her celebrated Flamenco tap fusion project Djellaba Groove and to form her first European tap company. Since then, her influence has left a deep mark in the Barcelona tap landscape where she runs the Jimmy Slyde Institute tap program in her own studio, (founded in 2010). She is collaborating with various world-known artists such as Japanese Taiko drummer Leonard Eto and recently performed their new work at the Acropolium of Cartagena in Tunisia. In Catalonia, she colaborates with various music entities and artists such as Tomasito, Carles Benavente, el Orquestra Simfónic de San Cugat, y más.