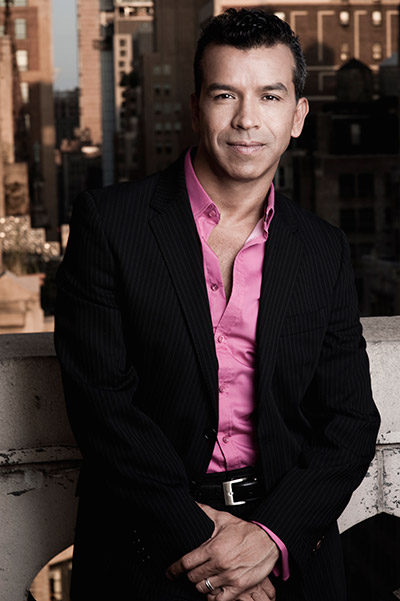 Internationally renowned theater choreographer and director, SERGIO TRUJILLO is the first ever Latinx recipient of the Tony Award for Best Choreography. He was honored with the Tony in 2019 for AIN'T TOO PROUD: THE LIFE AND TIMES OF THE TEMPTATIONS. Additionally, he won the 2015 Olivier Award for Best Theatre Choreographer for MEMPHIS. Sergio was previously nominated for several awards including a Tony Award for ON YOUR FEET!, Drama Desk Awards for HANDS ON A HARDBODY, LEAP OF FAITH, MEMPHIS, and JERSEY BOYS, a Lucille Lortel Award for SAVED, and received an Ovation Award for EMPIRE.

He made his Broadway debut in 1999, dancing in JEROME ROBBINS' BROADWAY. As a dancer, he has performed on Broadway in GUYS AND DOLLS, VICTOR/VICTORIA, KISS OF THE SPIDER WOMAN, and FOSSE.

He has introduced audiences to his choreography in many noteworthy Off-Broadway shows including INVISIBLE THREAD for Second Stage, ROMEO & JULIET for The Public Theater's Shakespeare in the Park, A TREE GROWS IN BROOKLYN and KISMET for New York City Center Encores!, THE GREAT AMERICAN TRAILER PARK for Dodger Stages, and BARE: A POP OPERA for the American Theatre for Actors.

Over his 25-year career, his list of international theater hits has expanded exponentially, to the point where he has had over 15 productions running at the same time globally. His work on Disney's TARZAN ran for 12 years in Europe, JERSEY BOYS continues a successful run all over the world — simultaneously in Europe, Asia, Australia, South Africa and the US. THE ADDAMS FAMILY found homes in Brazil, Argentina, and Mexico. Tony-Winning musical MEMPHIS played in movie theaters nationwide concurrently with its Broadway run, and streamed on Netflix soon after. His exceptional moves landed perfectly in PEGGY SUE GOT MARRIED for London's West End, KISS ME KATE and TWELFTH NIGHT in Tokyo, WEST SIDE STORY for Canada's Stratford Festival, and NEEDFIRE for the Royal Alexandra Theatre.

The list of national theaters and companies he has created original content for has grown to include FREAKY FRIDAY for Disney, MAMBO KINGS out-of-town tryout at San Francisco's Golden Gate Theatre, ZHIVAGO and THE WIZ for La Jolla Playhouse, the US tour of KISS OF THE SPIDER WOMAN, CARMEN: AN AFRO-CUBAN MUSICAL for the Olney Theatre Center (Helen Hayes Award nomination), THE WEDDING BANQUET for Seattle's Village Theater, and CHITA AND ALL THAT JAZZ in which he served as co-choreographer to Chita Rivera.

For the Los Angeles Opera he has choreographed THE MARRIAGE OF FIGARO, and for the New York City Opera, SALOME.