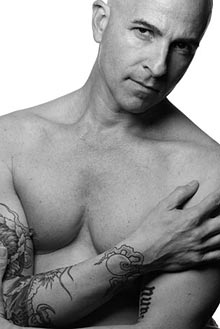 "The most appealing thing about Stephen Petronio's choreography has always been its raw New York energy. Almost more than any other US choreographer whose work we regularly see over here, Petronio taps into the mania of the downtown New York scene."
The Times, London

STEPHEN PETRONIO (Artistic Director/Choreographer) was born in Newark, New Jersey, and received a BA from Hampshire College in Amherst, MA, where he began dancing in 1974. Initially inspired by the dancing of Rudolf Nureyev and Steve Paxton, Petronio was the first male dancer of the Trisha Brown Company (1979 to 1986). He has gone on to build a unique and powerful language of movement in a career than spans over 25 years. He has received numerous accolades, including a John Simon Guggenheim Fellowship, as well as awards from the Foundation for Contemporary Performance Arts, New York Foundation for the Arts, an American Choreographer Award, and a New York Dance and Performance "Bessie" Award.

He has created over 35 works for his company, and has been commissioned by some of the world's most prestigious modern and ballet companies, including William Forsythe's Frankfurt Ballet (1987), Deutsche Oper Berlin (1992), Lyon Opera Ballet (1994), Maggio Danza Florence (1996), Sydney Dance Company (2003, full evening), Norrdans (2006), the Washington Ballet (2007), and The Scottish Ballet (2007). His company repertory works have been set on The Scottish Ballet, Norrdans in Sweden, Dance Works Rotterdam, National Dance Company of Wales, X Factor Dance Company in Edinburgh, Ballet National de Marseille, Ballet-de-Lorraine, and London Contemporary Dance Theater.

In Spring 2009 Stephen completed an evening-length work, Tragic Love for 30 dancers in collaboration with composer Ryan Lott (aka SON LUX) for Ballet-de-Lorraine. The dance premiered in Montpellier, France June 27, 2009. He completed another new work with Ryan Lott titled By Singing Light, for the National Dance Company of Wales that premiered in Cardiff in October 2010. New projects include The Social Band, a commission for Other Shore Dance Company in New York that premiered on February 10, 2011 at the Historic Asolo Theatre in Sarasota, Florida and Prometheus Bound, a musical for the American Repertory Theater, in collaboration with director Diane Paulus (HAIR), writer and lyricist Steven Sater (Tony award, Spring Awakening) and composer Serj Tankian (Grammy award, lead vocalist "System of a Down"), which had its premiere on March 4, 2011. Stephen is currently working on a memoir with a working title, "Notes from A Life in Motion."

Class Description
Classes are focused on building a rigorous and intelligent movement practice. Beginning with a warm-up that guides the participants to make a muscular and skeletal connection to their unique physicality, emphasis is placed on the articulation of the spine, the opening of the joints and the direction and flow of energy throughout the body and into space. This preparation is followed by phrases and variations of movement derived from Company Repertory, addressing its unique focus on dynamic sequencing, poly-rhythmic initiations, and a sense of fearlessness within a complex architectural form.