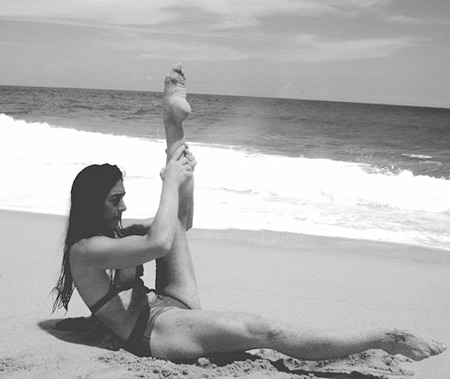 Teri Lee Steele graduated from the University of California at Berkeley with her B.A. in Physical Education with an emphasis on Exercise Physiology and Sports Medicine in 1990. That same year she received her Health and Fitness Instructor certification from the American College of Sports Medicine. She moved to New York in 1991.

From 1991 to 2002, Teri worked as the Head Personal Trainer at PEx, a private New York-based training facility. Teri helped to modernize PEx's trainer's training program and hired and trained all of the new trainers from 1997-2002. In 1999 she received her certification in Kickboxing. Teri was on faculty at Steps as a Modern Dance teacher from 1993-2002. She obtained her Pilates Mat Certification in 2000 and Pilates Apparatus Certification in 2001 from the Kelly Kane School of Core Integration . In 2002 she became certified by the National Strength and Conditioning Association. Since the birth of her daughter in 2002, Teri has been training her clientele privately as well as maintaining a faculty position at Dance New Amsterdam as a Dance Teacher and Pilates Instructor. She currently teaches at Katonah Yoga, NYC, Peridance Center and Dance New Amsterdam and is thrilled to be coming back to Steps on Broadway!

Teri created the Steele Pilates Mat Certification Program (approved by the Pilates Method Alliance) at Dance New Amsterdam in 2005 and Continuing Education Curriculum in 2006. She has certified Pilates Instructors in her Steele Pilates method in the USA, Sweden, Norway, Germany, Spain, Japan and Israel.

What is Pilates?
Pilates merges the connection between the body and mind. By intently focusing on the Core Principles and Principles of Movement in Pilates, one can retrain the "tainted" or improper movement patterns that have been physically embedded in ourselves from habits or improper training.

What is Steele Pilates?
Steele Pilates is an hour in which every student is educated in the Pilates Core and Movement principals and how they relate to each exercise individually. The class flows effortlessly from one exercise to another via choreographed transitions that challenge the student's strength and create endurance. Above all, Teri is known most for her more advanced classes in which creative modifications and choreographed exercise sequences are designed to teach each student to impart Pilates principals into movement sequences rather than just individual exercises. To do this in a way that challenges every student yet supports them throughout the entire hour, the personal training principals are applied in order to keep the class moving (no rest periods!) for the entire hour. Students leave feeling neuro-muscularly, physically and cerebrally challenged, yet with a sense of accomplishment and total body integration.