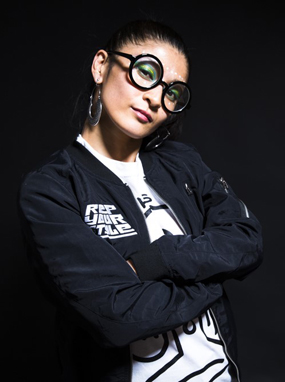 Yuko "Uko Snowbunny" Tanaka was born in Japan and moved to New York to search for roots of Hip Hop culture. She is trained by the legendary Hip Hop dancer, choreographer, and instructor, Buddha Stretch of Elite Force Crew. Since her performance debut in 2008, she has been raising the bar in her work as a choreographer, performer, teacher, and well-rounded street dancer.

Since 2008, Uko has built an ample performance career. She performed in three of MTV's Best Choreography Nominee pieces, a locking piece entitled "Rock/Lock" at Summer Stage at Herbart Von King Park, a house/salsa piece entitled, "Chocolatino", in "EFC With Friends" with Elite Force Crew in the 21st annual MopTop Anniversary at Alvin Ailey City Theater, a piece called "What's Poppin" in the Urban Movement Tour at Roseland Ballroom, and for the Nile Rogers & The Chic Organization with DJ KS 360 presents Behind Groove at Lincoln Center Out of Doors. She has also starred in "Super Buddha & Bunny Show" for Roots of Hip Hop by Robin Dunn at NY Dance New Amsterdam.

Her choreography credits include; co-choreographer of the Buddha & Bunny Show at Casita Maria Block Party in 2012, a lindy hop influenced piece at EXPG's showcase at Highline Ballroom in 2015, co-choreographer to Ephrat Ashley and Ms. Vee in "Uptown Gets Down" in collaboration with Dancing in the Streets and Breakin' Convention NYC at Apollo Theater, and was assistant choreographer to Buddha Stretch for "Stepping Out With Buddha Stretch" as part of Midsummer Night Swing 2011 at Lincoln Center. Uko began to create her own dance pieces featured at Ladies of Hip Hop Festival 2012, 2013, and 2014. As lead Hip Hop dancer and co-choreographer, Uko lead the "Battle of Yestermore" by Iona Brown in several theaters and festivals including: Skylight West NYC, Miami Art Basel by Performa in 2011, the Arts and Humanities 2012, and Corcoran Gallery of Art in conjunction with the 2013 National Cherry Blossom Festival. Other choreography credits include; Danceathon with Nick Cannon on NBC, Breakin' Convention Apollo 2015, and South Bronx Culture Trail at Casita Maria Arts and Education Center Block Party 2012, 2013, & 2014, Ladies of Hip Hop Festival 2012, 2013, 2014, & 2015, and The Clutch Fest 2014 & 2015.

She's had the honor of working with several famed choreographers such as the Tony Award winning Jason Samuels Smith and three of MTV's Best Choreography Nominees in the piece "Rhythmdome", a collaboration of Tap and Hip Hop at the Fall for Dance Festival at NY City Center. She has also worked with Buddha Stretch, Michele Byrd, and Ms. Vee in "Hip Hop Kung Fu" at Asian Society. Uko was one of the main performers for the Dancing with the Streets presents Centrifugal Force at Lincoln Center with Buddha Stretch, Adesola Osakalumi, and Gus Solomon.

Uko is currently a Hip Hop teacher at Takala Land Dance Studio, a part of the faculty at Steps on Broadway, instructed at the Museum of City of New York in 2015, also serves as an assistant of Buddha Stretch, teaching locally in San Francisco, Los Angeles, Boston, Baltimore, Denver, and Miami. Internationally, Uko was invited to do her first international workshop at European Championship in Ljubljana, Slovenia, also as the assistant in Switzerland, France, Italy, Hungary, Romania, Croatia, Canada, Taiwan, Hong Kong, Australia, Japan and Malaysia. Uko keeps learning the steps and history of various dance styles, which have inspired Hip Hop freestyle dance culture. Uko's goal is to be a dance teacher who can teach not only movement but the moves behind the movements.