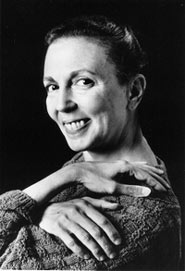 Victoria Simon was one of the first dancers selected by George Balanchine to re-stage his ballets. In 1965, recognizing her talent for learning roles quickly, Mr. Balanchine asked her to stage The Nutcracker in Cologne, Germany.

Now, as Ballet Mistress for the George Balanchine Trust, she has staged over 25 of the master's ballets for more than 80 companies on every continent in the world. Her love for the ballets and respect for the choreography are evident in her stagings. With her eye for detail and her emphasis on musicality, she is one of the most sought after and respected re-creators of George Balanchine's masterpieces.

Ms. Simon began her study of ballet in New York City at the School of American Ballet and was a Candy Cane in Balanchine's original production of The Nutcracker. She became an apprentice with the New York City Ballet at the age of 17, and a few months later, two days after her 18th birthday, she was invited to join the company. She went on to become a soloist before taking on the challenging role as Balanchine's representative around the world.

In 1981 she began to choreograph her own ballets and created works for Ballet Met, Nashville Ballet, Des Moines Ballet, Charleston Ballet Theatre, and a workshop at the School of American Ballet. She is also in great demand as a teacher of the Balanchine style and technique.

She is married to John Wion, principal flutist with the New York City Opera and professor of flute at the Hartt School. She has two sons who are not in the arts but work in the field of computers.