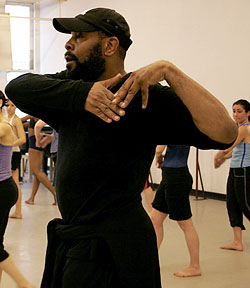 KEVIN WYNN (Artistic Director) received his early training in Washington, D.C. at the Duke Ellington School of the Arts and continued his studies at Cal Arts and S.U.N.Y. Purchase. He was a soloist with the Jose Limon Dance Company and has worked with Jowale Willa Jo Zollar, Laurie Carlos, Vernon Reid and Living Colour, Dianne McIntyre, Sounds in Motion Dance Company, Mel Wong, Kazuko Hirabayashi, Daniel Nagrin and Jacques D'Amboise.

Kevin is an Associate Professor of Dance in the Conservatory of Dance at Purchase College, and is also on the faculty of the Alvin Ailey /Fordham University B.F.A. Program.

Kevin has received numerous grants and awards for his work, including a National Endowment for the Arts Fellowships.